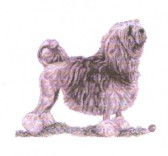 THERE WILL BE REGULAR

Anyone wishing to let me have any news of forthcoming shows, results of Open Show wins, Agility, Obedience, in fact anything you get up to

let us know for our Breed Notes Page.

You can also submit photographs if you wish

So keep the news coming in

The Schedule is now out and on the Club website for the Club Championship Show to be held on 9th November at Thorpe Willoughby, judge Alan Bendelow (Casarow/Kimbering) entries close on 19th October.

The Club is holding a Seminar and Judging Examination on Sunday 20th October in Stafford, full details and application forms can be found on the Club website. At going to print there are a couple of places left for the examination if you are interested please contact the Secretary asap.

Next Championship Show is Darlington where there are tickets this year, judge Margaret Boulcott (Ingerdorm) there are 24 Lowchen entered. Entries coming close to closing for South Wales and LKA entries close on 21st October. Hyde & District Canine Association have Lowchen classes at their open show to be held in Stockport on 17th November judge Hayley McCallum (Pandaprints) entries close 19th October. The year just seems to have disappeared. Please let me know any news or results you have.