There are 20 Lowchen entered

There are 9 Lowchen entered 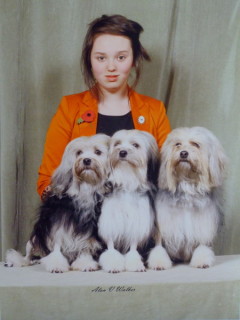 (FROM LEFT TO RIGHT)﻿

I have been involved with dogs ,one way and another, all my life. Some years ago we began to exhibit and then going on to breeding Cavalier King Charles Spaniels, a breed we still have today and although don’t appear in the ring often these days we still maintain our healthy, typical breeding line. The Lowchen caught our eye and it was Jade who initially fell in love with the breed and soon we were all hooked! After watching the breed for some time we purchased our first Lowchen “Lowgold Barefoot Ballerina For Jadechar” (Milly) in 2008, Jade was 10 years old and had already been showing Cavaliers and competing in Junior Handling since the age of six. Together that first year Jade & Milly competed in the UK Junior Handling finals at Richmond, and although the young rebel Milly managed to get off her lead in the ring, they still took 3rd place. From there they went on to qualify and compete at Crufts the following year in both the Junior Show Handling Finals and the National Junior Handler of the year, being placed in both competitions.

Now Jade concentrates on the breed classes , winning her 1st CC with Tomolly Lucy Lou when Jade was just 12 years old, going on to gain her Ch crown in 2014.

Joining the Jadechar team in 2012 our young boy bred by Steve Brown “Broevans Mark Of The Hero” is a joy to live with and a real showman and has brought me back in the ring handling again and I am enjoying every minute of it. Winning the CC with BOB at Three Counties show in 2014 was a great delight.

Our homebred Jadechar Viva La Gloria  gave us four beautiful girls in her first litter and has gone on to produce a further 2 litters both with five puppies. She will now have a well earned retirement having done her bit well and truly !

Joining the Jadechar team in 2014 Pridesden Personified bred by Sandy Steward. Raven has had a great start to her show career winning BPIS at Merseyside Toy Dog Show at her first outing. She went on to win the RBCC at her first Championship show, two further RBCC from puppy classes. At Crufts 2015 we were delighted to see her awarded the BCC at just 18 months old, a great moment. She has now taken time out from the ring and produced two beautiful boys for us, but will be back out in summer 2016.

We would also like to mention all our wonderful puppy owners who are now enjoying the delights of Lowchen ownership we could not wish for better for our little ones.

The Lowchen is a wonderful breed, and we are so glad we discovered them.

(PRESS F TO VIEW FULL SCREEN AND ESC TO RETURN)